The early history of shale oil production in Broxburn is complicated. At least eight small-scale oil works operated within Broxburn during the 1860's and early 70's. All these enterprises were linked to Robert Bell, who ultimately became chairman of the Broxburn Oil Company on its formation in 1877.

" The Broxburn Oil Company own or lease over 600 houses in and around Broxburn district. The houses are mostly built in rows ; some form three sides of a square; they are in blocks of six, eight, sixteen, and twenty houses each, the two latter numbers consist of two-storey blocks. There are about 130 single-apartment houses, many of which are back to back. The rental is 1/8. to 1/1. per week, inclusive of local and county rates. Most of these houses are provided with an outside water-closet for every two tenants, and a washhouse for every four tenants. The water is supplied by a limited number of stand-pipes, and the drainage is by open channel. They are, in the main, kept as clean and orderly as is possible under such insanitary arrangements. There are also some 470 houses, about one-half of which consist of room and kitchen, and the other half of room, kitchen, scullery with sink, and water-closet. The dimensions of these houses vary considerably, the following is an example:- Room, 11 ft by 10 ft, also bed-recess ; kitchen, 13 ft by 10 ft, also two bed-recesses. Single apartment, 13 ft by 10 ft, also bed-recesses; height of ceiling, 9 ft. For two-apartment houses the rental is 2/3 to 2/9 per week, and where sculleries, sinks, and water-closets are provided, the rental is 3/3 per week, inclusive of local and county rates. In some cases two single apartments are made into one house, and the rent charged is 3/8 per week. Washhouses are provided for every four tenants. The refuse from all the houses is deposited in ash-pits, which are a serious source of trouble in summer time. These ash-pits are built between the blocks of houses. Clothes poles are studded in the space between the backs of the rows. The existing privies are such that women cannot use them, and men should not. They should be done away with absolutely, as should the ash-pits, and a daily system of refuse removal adopted. The pathways are made of ashes for the most part."

Some of those directly employed by Bell were housed at Holygate and at Bell's Rows. Other companies also constructed housing for their workforce. The 1871 census revealed oil workers living at:

The Broxburn Rows were constructed to serve the new Broxburn Oil Works which went into production in about 1878. Houses were built either side of the existing Greendykes Road, along with three parallel rows to the west creating Back Street, Mid Street and West Street. Most of the rows lining Greendykes Road were two storey buildings with an external stair case to the rear. There were three blocks each with ten back-to-back single room homes facing either Mid Street or Back Street. Most other homes appear to have had two rooms. Sculleries seem to have been fitted to most homes early in the 20th century. 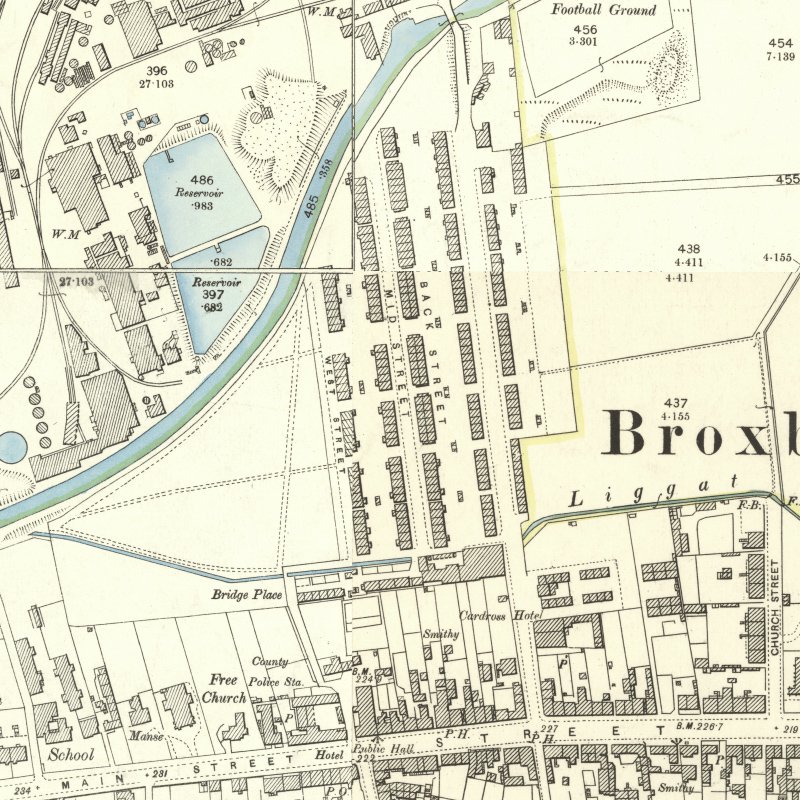 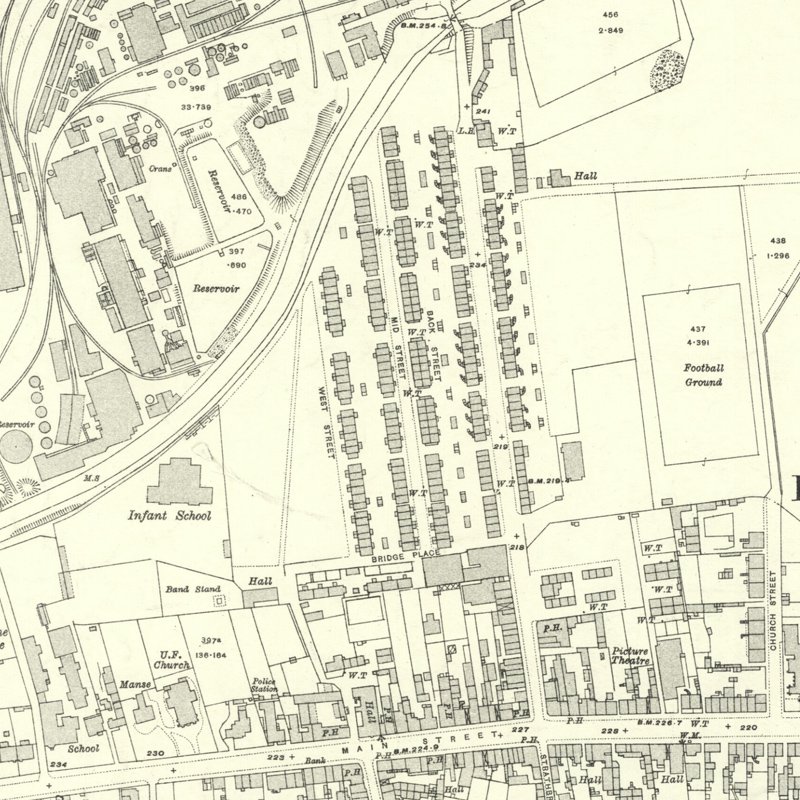 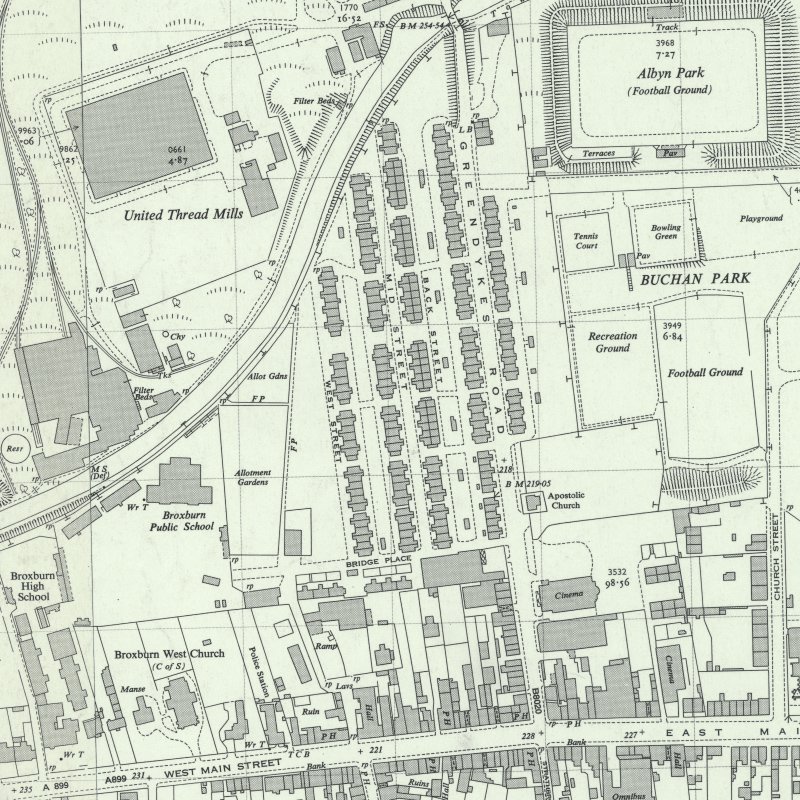 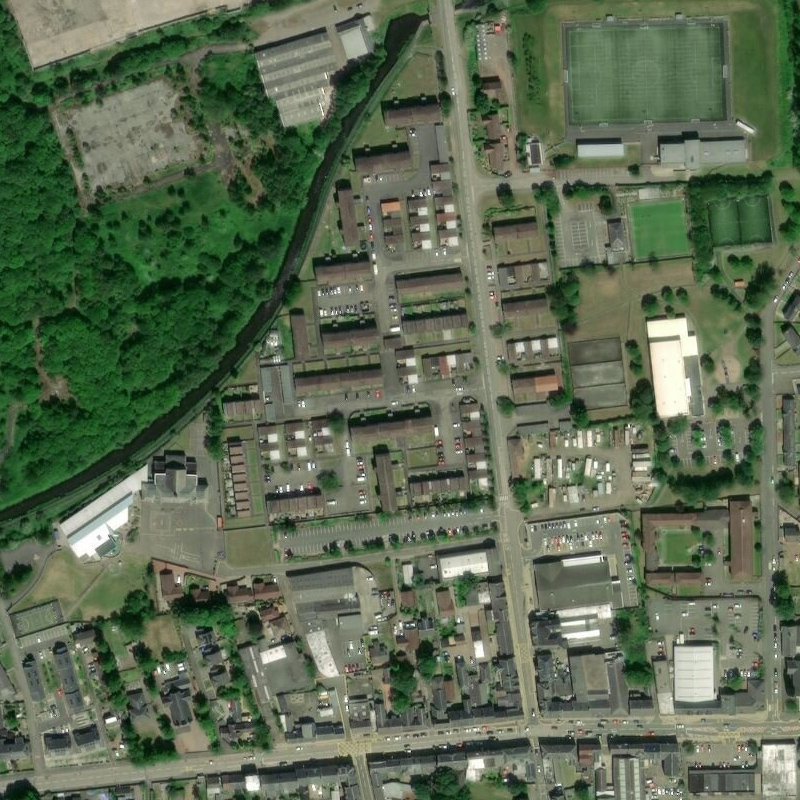 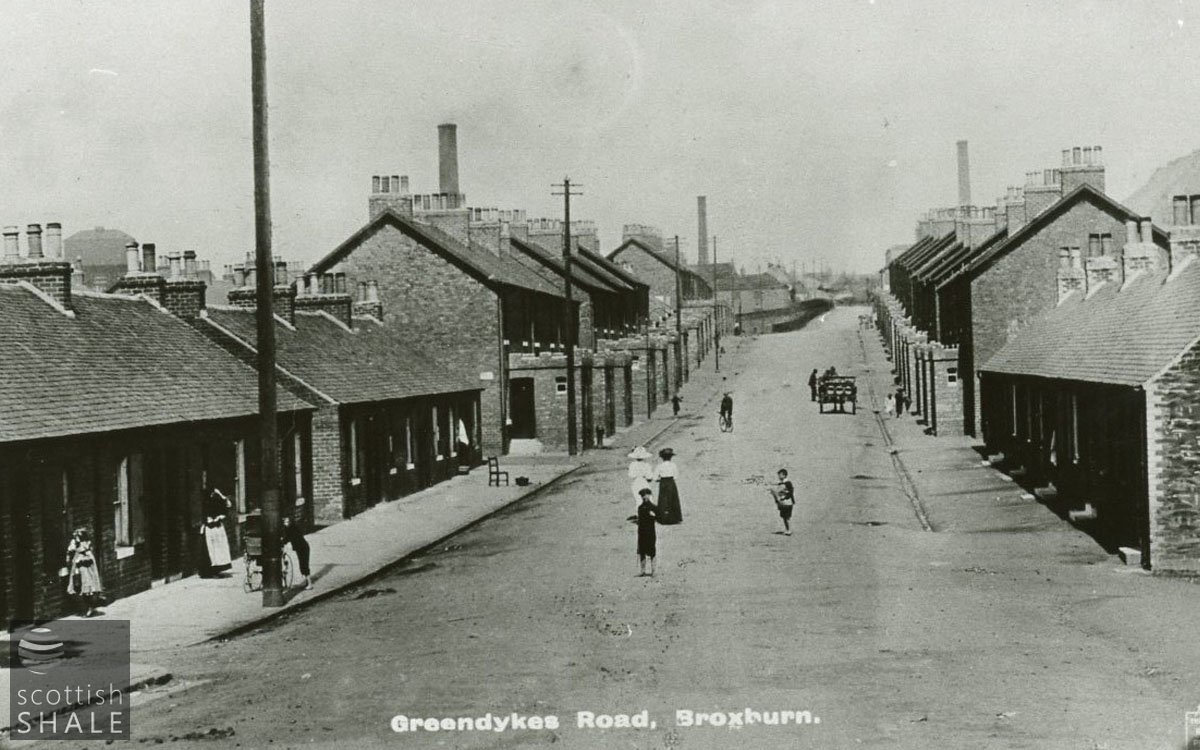 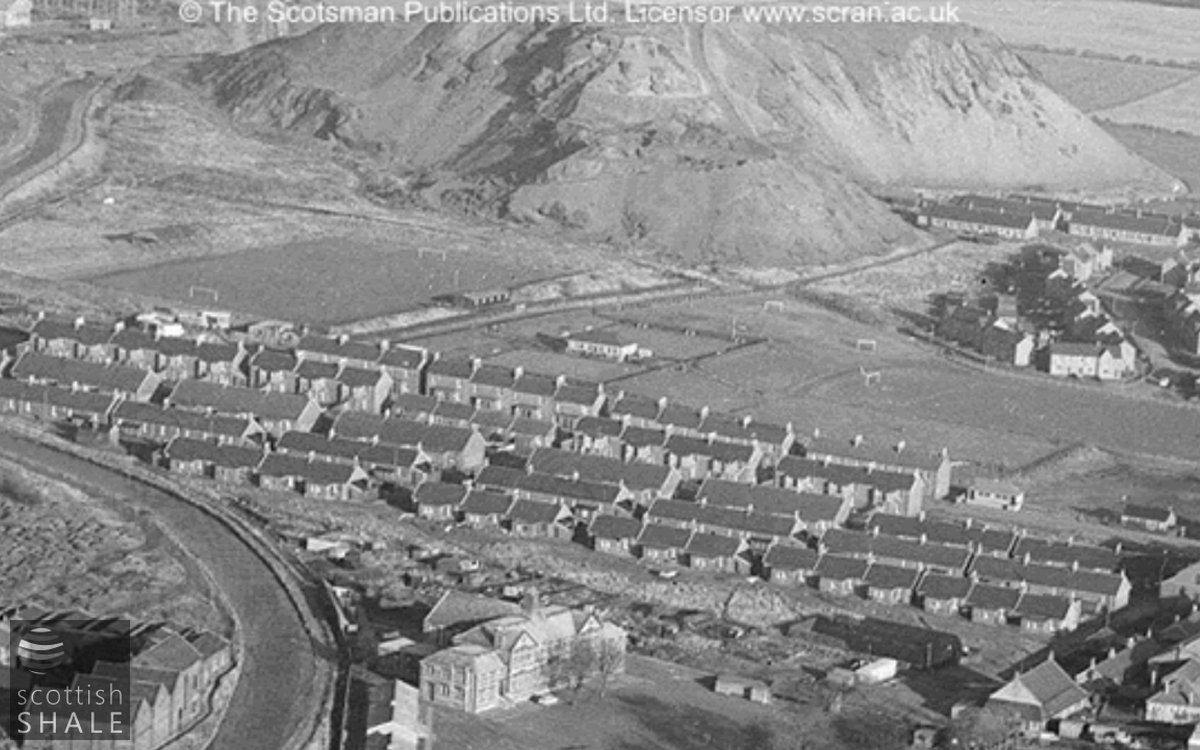 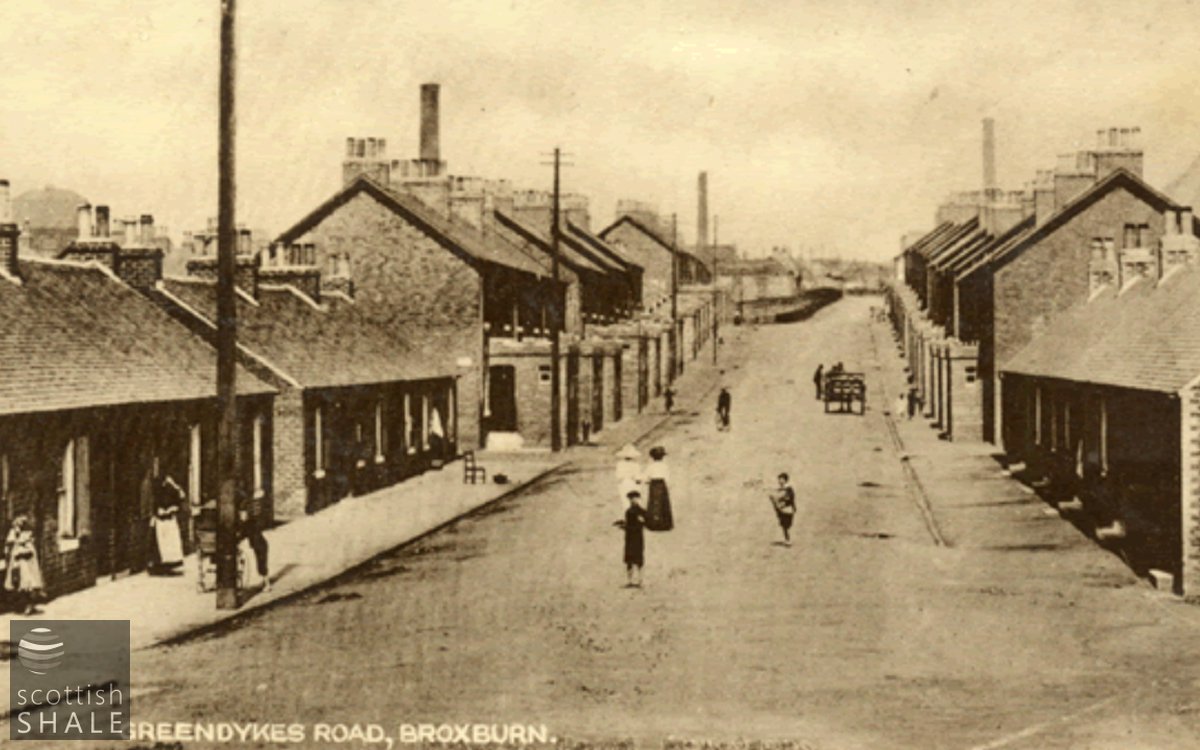 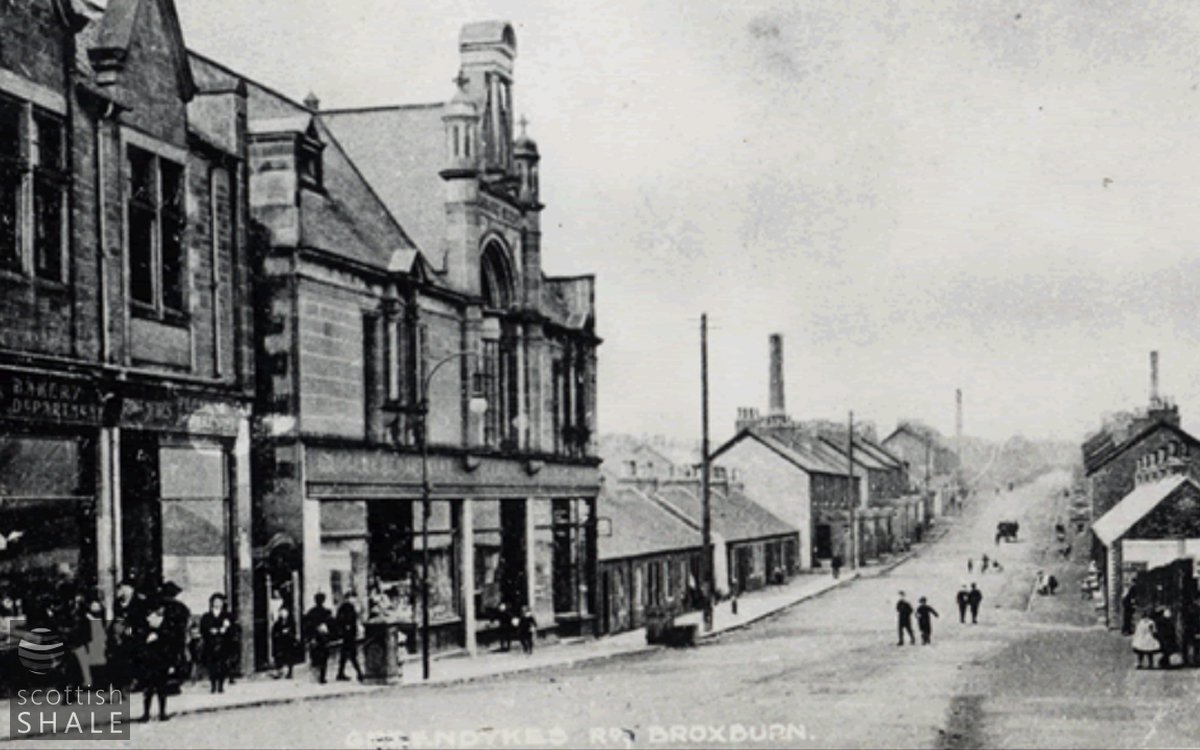 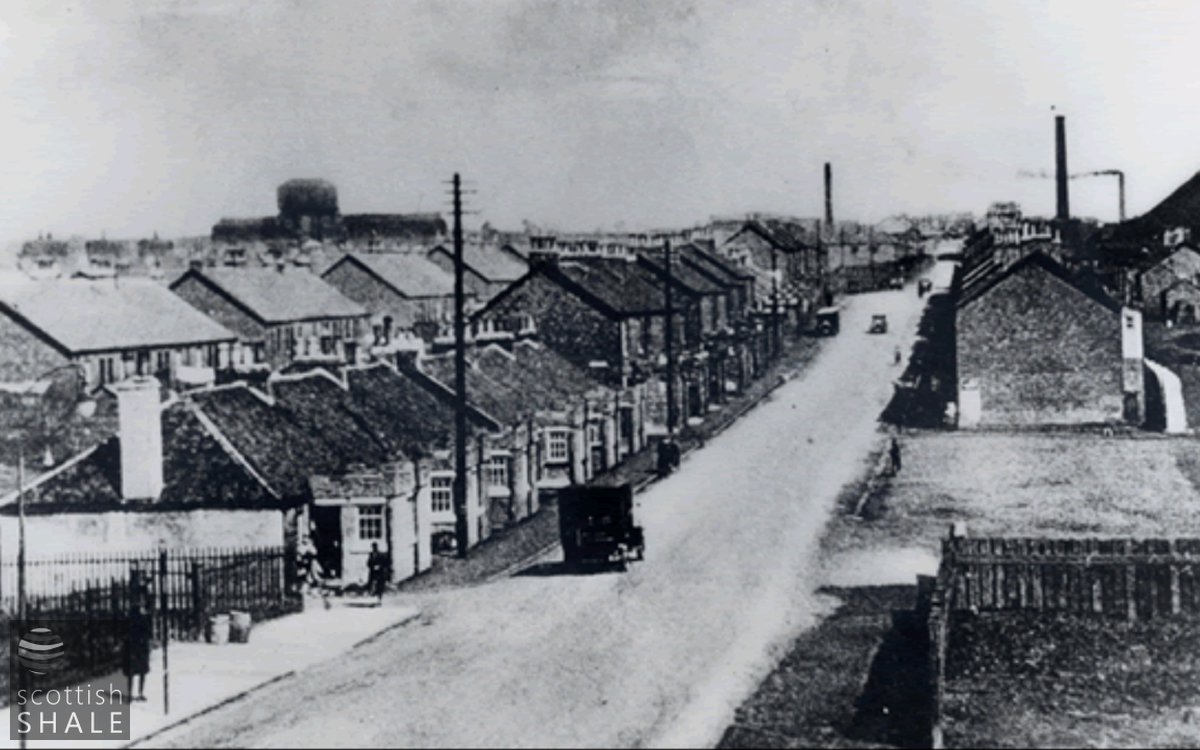 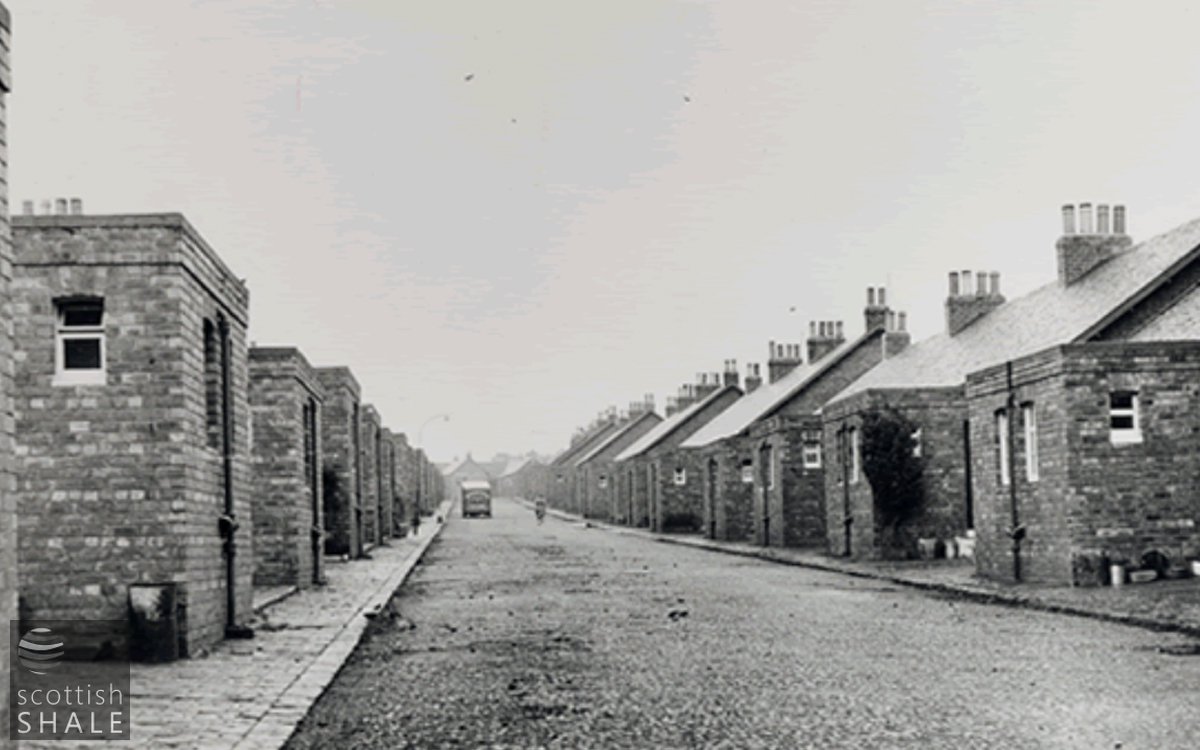 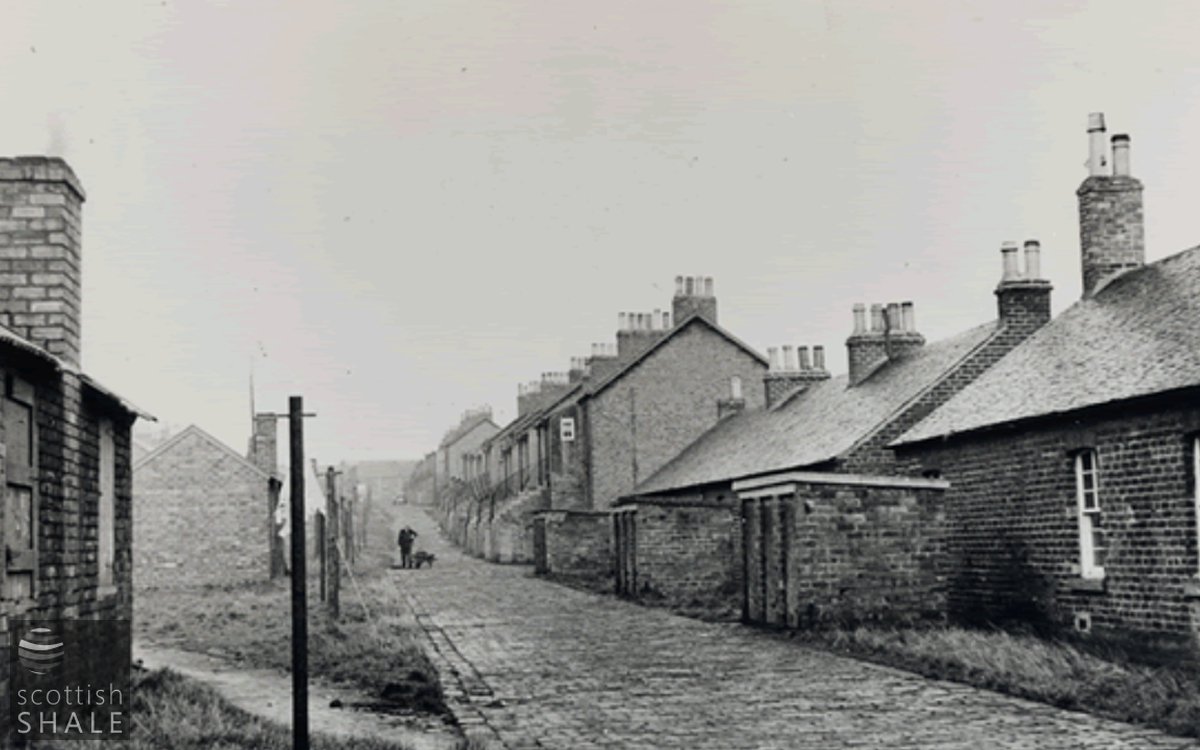 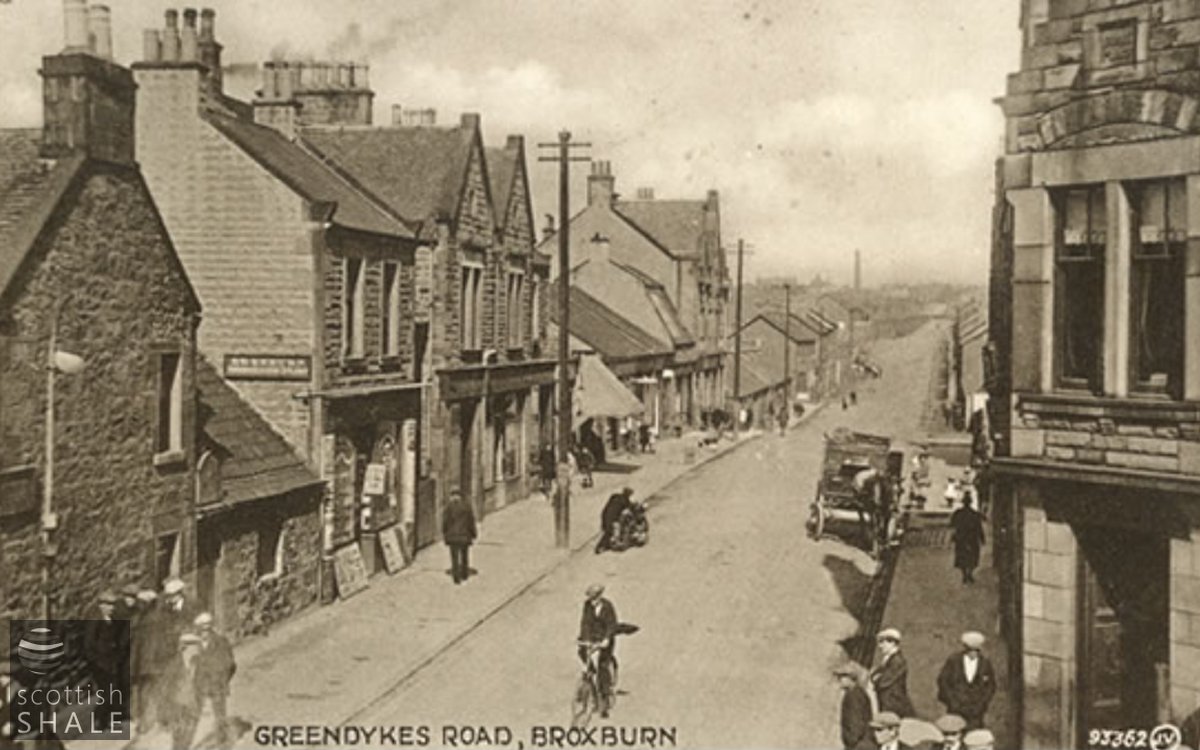 View up Greendykes Road. from Broxburn Main Street. with rows and oil works in the distance 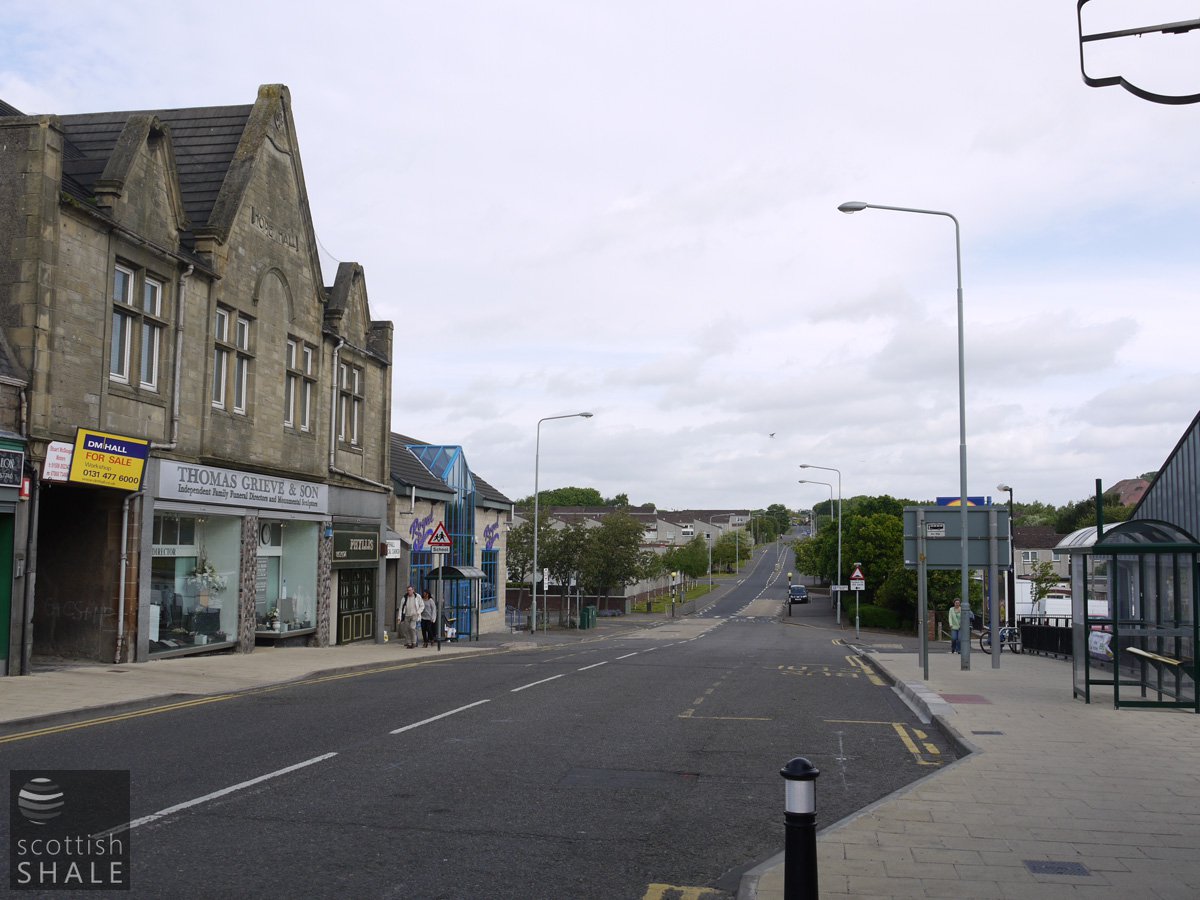 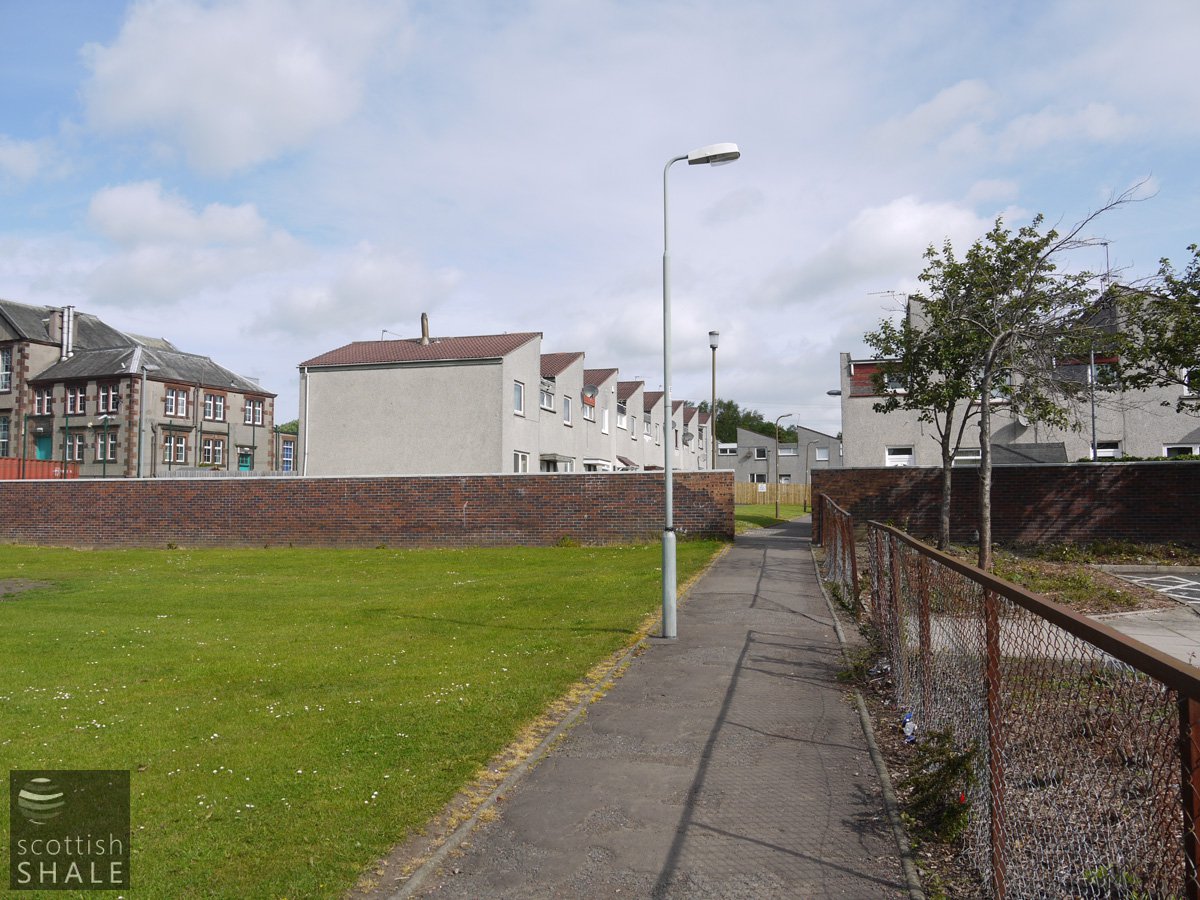 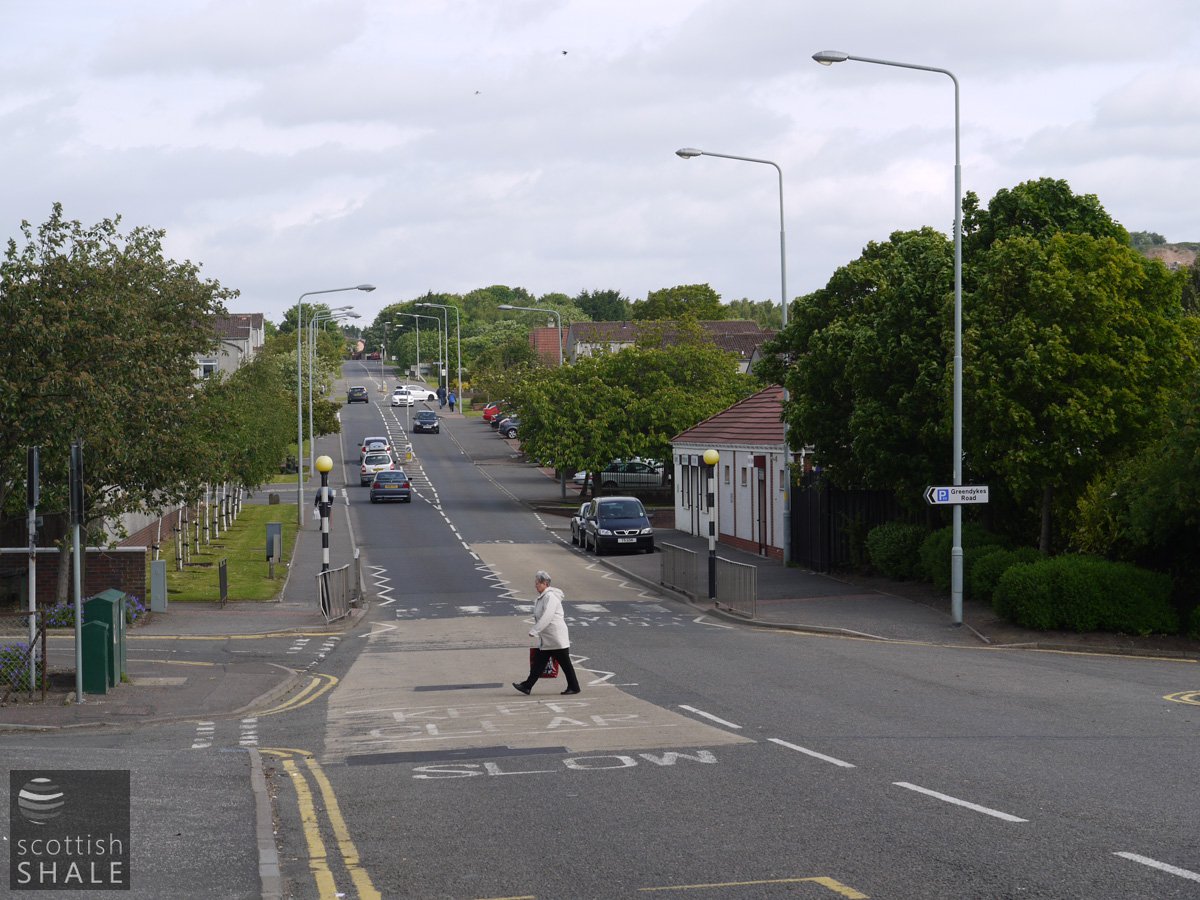 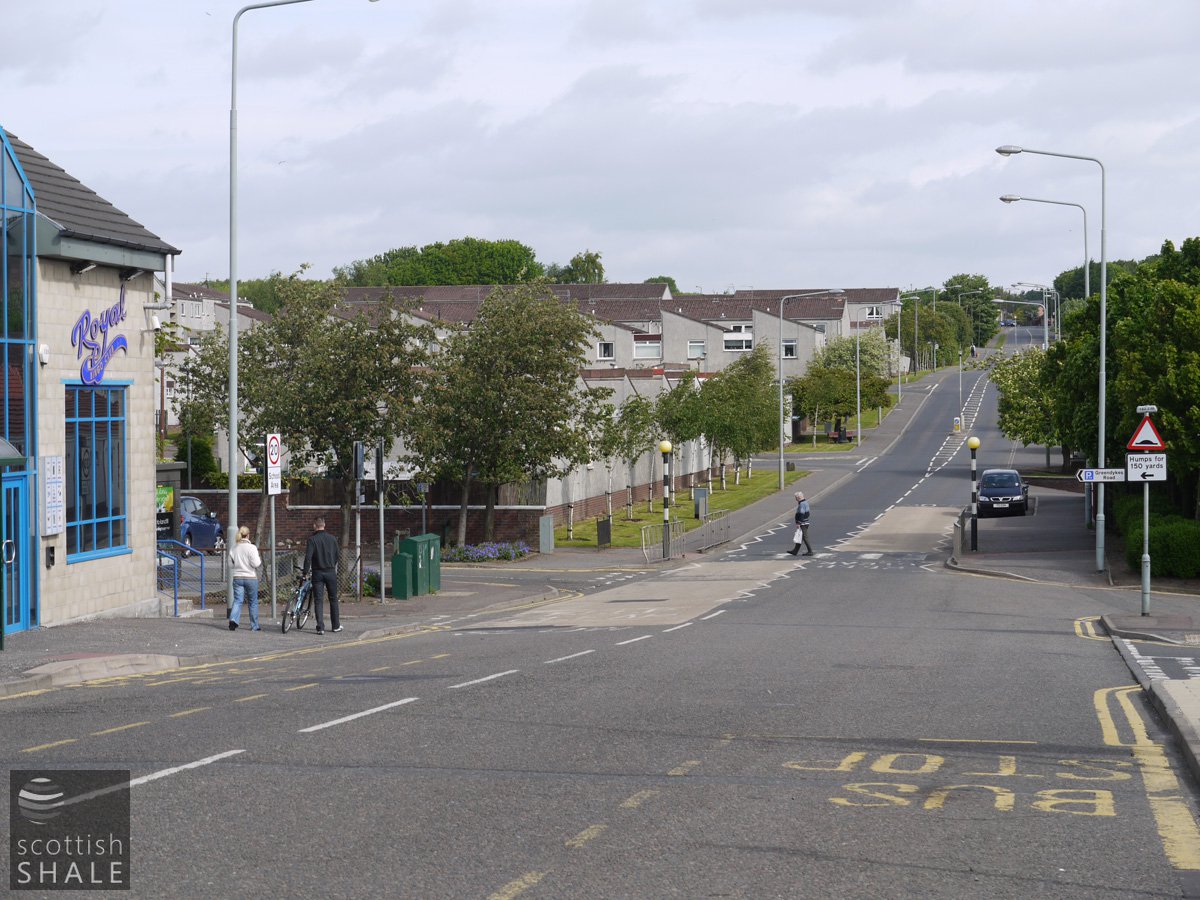 EXIT POULTRY ETC - ENTER HEALTH AND CLEANLINESS. The Broxburn Oil Coy. have taken a very commendable step in enforcing the rule "That no workmen shall be allowed to keep dogs, swine, or poultry of any description. Any person violating this rule shall be liable to instant dismissal." For a long time past the amount of livestock of various kinds kept in the Company's houses, especially in Greendykes Rows, has been sufficient to bring a plague upon the district.

DEMOLITION OF OLD HOUSES. —On Monday a beginning was made with the demolition ten Single storied houses situated at the foot of Greendykes Road on the east side. They were among the oldest workmen's dwellings, and completely out of date. Their removal means the disappearance of an eyesore.

Twelve house at Greendykes Road have been demolished, the site cleared complete with exception of a 9" drain which runs full bore. Arrangements are in hand to minimise the flow of water and re-direct this drain. One house at Gerson Park has been sold. The remaining house will we sold. The remainder of the houses in Broxburn including the houses at Holygate Station Road and Greendykes Road will be maintained. The Rover Scouts to be granted tenancy of No.45 Mid Street. Works Offices to be advertised for sale when vacated. Architectural Drawing Office to advertise.